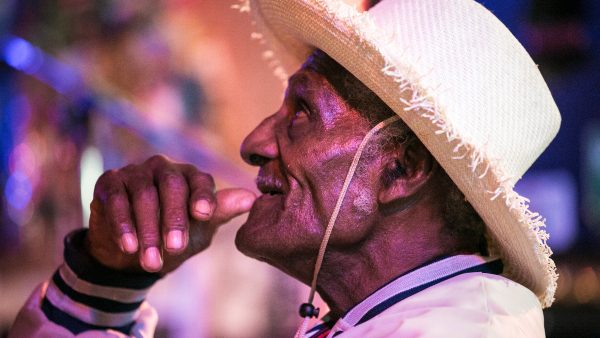 Alabama native and blues musician Henry “Gip” Gipson is dead. Gipson died Tuesday at a nursing home in Bessemer. He was 99.

Gipson was known worldwide for his Saturday night backyard parties. “Gip’s Place,” his Bessemer juke joint, has been the gathering spot for blues since the early 50s. Each Saturday, Gipson would start the party with a prayer followed by his favorite gospel song, “Amazing Grace.”

Gipson was a gravedigger by day and a bluesman by night. He hadn’t performed at the juke joint in nearly five months. Gipson spent his last days in a nursing home, but visiting artists have kept the tradition going.

Brian Futch, lead singer for the Alabama Rhythm Brothers, is a regular at the juke joint. Futch says it’s his favorite venue.

“There’s not any place I’ve ever played in my entire life that’s as fun to play as this place because people with different backgrounds, political stances, whatever there is that can divide people, disappears at Gip’s,” he says.

Diane Guyton, Gipson’s manager in his later years, says everyone will remember Gipson for his big smile and hospitality. He would walk guests from the grassy parking lot down the street and into his backyard. Visitors pay $10 and it’s BYOB (bring your own bottle).

Guyton says Gipson wanted everyone to feel welcome when they came to Gip’s Place.

“He tried to bring people together. His motto is no whites, no blacks, just the blues,” she says.

Early in his career, Gipson performed alongside some of the greatest blues artists of all time, including B.B. King and John Lee Hooker. Though he’s never recorded an album, Gipson contributed to the music industry in other ways, passing on old music, stories and advice with emerging blues artists. Georgia bluesman Jontavious Willis is one of them.

“He’s such a nice guy,” he says. “But at the same time he’s real smart and he’s a businessman over everything.”

“From what he told me, almost all the land that’s around it, he owned. And he started his own business from the ground up and kept a level head and was always nice to everybody.”

Willis is infatuated with early blues, the music Gipson grew up listening to — music by Big Maceo Merriweather and songs like “Kansas City Blues.” Willis says he often visited Gipson to learn more about the music of his era.

“Mr. Gip was brought up in the transformation of blues,” Willis says. “So in the 20s in the hokum blues and then into the 30s. Then when it started getting electrified in the late thirties so all of that.”

Gipson’s knowledge and influence of the blues was strong. He’ll be remembered for keeping the blues alive right in his own backyard.

After a recent change in management, the future of Gip’s Place is unknown. But a Facebook post Tuesday by Gip’s Place says they plan to “keep his legacy alive.”

Local musicians and many in the Bessemer community hope the juke joint will remain open for as long as it can. After all, they say that’s what Gipson would’ve wanted.

While the details for Gipson’s memorial service have not yet been released, many Gipson fans – from politicians to musicians – paid tribute to him on social media.

Today we said farewell to an icon.