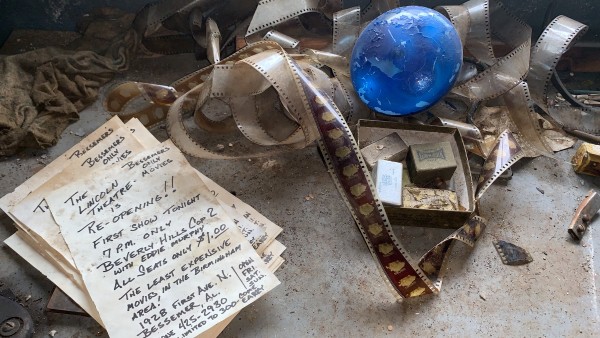 Old flyers and film spools sit on a desk in the Lincoln Theatre's projection room.

Acclaimed actor Andre Holland is best known for his role in the Oscar winning film Moonlight and playing Andrew Young in the movie Selma.  In 2017, Holland purchased the Lincoln Theatre in his hometown of Bessemer, Alabama.  It’s a historic theatre that needs restoration and Bessemer residents are excited about the potential.

The Lincoln Theatre opened in 1948 in Bessemer’s downtown district.  It was known as the cinema for African Americans until it closed in the early 70s.  The owner of a neighboring clothing store then used the theatre to store furniture, shoes and mannequins, and at some point it was also a wig store. But decades later, some of the theatre’s original features remain.

“The ticket booth is still here and upstairs a lot of the original projection equipment is still in the building and a few remnants of older artifacts are still around,” Mary Holland says.

When her son, Andre, purchased the theatre a couple years ago his vision was to re-open it as a single-screen cinema and performing arts space. Andre lives in New York, so he left his mother in charge.

“I think preserving it will help reenergize and rejuvenate the communities around it,” Holland says. “And hopefully turn this into the new entertainment district for the city of Bessemer.”

It looks like a big dusty warehouse, but you can tell it is a theatre by the slope of the floor. There are dozens of the original wooden theatre seats and on the ceiling there is a mural with swirls of green, orange and yellow.  Once the restoration is complete, organizers plan to offer performing space for plays, music lessons, art and more for Bessemer residents.

“I know for a fact that children in Bessemer are talented. I see it every day when I go to work,” says Temika Reasor, who works for the Bessemer City Schools System. “They just need the outlet.   This is the outlet and it could change so many different lives.”

Reasor took a tour recently with her daughter Alexandria, who is a junior at Bessemer High School. She loves art and plays the cello. But getting to lessons, she says, is a hassle.

“The only way for me to play the cello is to go outside the Bessemer community, so I have to drive all the way to Homewood and Brookwood just to take music classes,” she says.

To make it easier for kids like Alexandria to do what they love,  Holland has teamed up with the Birmingham-based project consultant who helped restore the Alabama and Lyric theatres.

The Alabama State Council on the Arts is funding a design plan for the Lincoln’s marquee and signage. The city of Bessemer has also committed $100,000 towards the restoration.

Holland is excited the grants are rolling in, but says it’s not enough. The Lyric’s restoration cost nearly $11 million. The project consultant says the Lincoln rehab will cost about half that.  In the meantime, organizers have been focusing on cleaning up the theatre.  Holland says they have had help from dozens of volunteers, including a group from the Bessemer Historic Society.

“We have great support from the community and so we’re just gonna claim that we’re gonna have it up and running in late 2020 or early 2021,” Holland says.

Holland is hopeful the project will attract additional financial support from outside Alabama.  Last week, nearly 100 filmmakers toured the theatre as part of an exclusive Sidewalk Film Festival retreat.