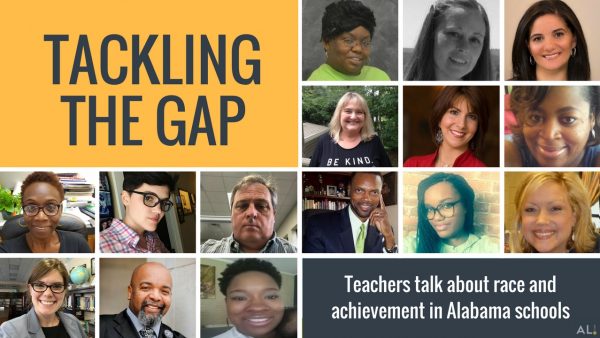 African-American students in Alabama tend not to perform as well on standardized tests as their white counterparts. That’s part of the so-called “achievement gap,” one of the most persistent and touchiest issues in education. But a new data-driven series by Al.com, journalism nonprofits Spaceship Media and Solutions Journalism Network, and teachers from across Alabama aims to address those disparities. Lead reporter Trisha Powell Crain of Al.com talks with WBHM’s Dan Carsen about the gap, and what teachers are trying to do about it.

“There’s always been this 20- to 30-percentage-point gap between black students and white students. And there are a lot of factors. … First you look at poverty — their parents may not have the resources to give them extra opportunities, to have books at home, to transport kids to after-school activities. But there are also school-based factors. We know that black kids and Hispanic kids are less likely to be identified as gifted. Why is that? It’s not the ‘raw material’ — that’s just not the case.”

“In places where there is segregation, high [degrees of residential] segregation — all you have to do is look at Jefferson County and you see Vestavia and Homewood — there are often large achievement gaps. I mean they can almost predict where those achievement gaps are going to be. You have to identify the problem before you can address it.”

It’s Not Simple, Not the Kid

“We’re starting to look at being very conscious about who you are identifying for [disciplining and] for gifted opportunities, being very conscious about supporting children, taking them where they are, and being deliberate in who you offer resources to. I mean, when you think about it, there’s one teacher in front of 20 kids, sometimes 30 kids, sometimes 35. So a teacher has to figure out, ‘how am I going to divide up my time? Who am I going to help? Who am I going to pay attention to?’ [Also,] are there wraparound services?’ We know in community schools where there are wraparound services available to help kids with all of that stuff outside of the school day, the children learn better. We aren’t doing that much in Alabama.”