BirminghamWatch’s Glenn Stephens took a look at where US Senate candidates Roy Moore and Doug Jones stand on key issues. Here’s their story.

Alabama voters will choose between candidates with contrasting views on topics ranging from health care to abortion, and taxation to immigration when they vote for a new U.S. senator on Dec. 12.

Republican Roy Moore and Democrat Doug Jones have outlined their positions on a broad array of issues as they campaigned for votes in the special election. The winner will succeed Sen. Luther Strange, an Alabama Republican who was appointed to the seat by former Gov. Robert Bentley after Jeff Sessions resigned to become attorney general.

Following is a look at the stances of Jones and Moore on several leading issues, drawn from their comments on the campaign trail and in various media reports, as well as from material posted on their web sites.

Jones: Jones said he wants to improve the Affordable Care Act, known as Obamacare, while maintaining its provision prohibiting insurance companies from refusing to cover people with pre-existing conditions.

“Health care is a right, not a privilege limited to the wealthy and those with jobs that provide coverage,” he said. Policies should meet basic standards and include coverage of preventive care, serious illnesses, prescription drugs, maternity care, birth control and mental health, he said.

Jones said the government already insures small-business loans, home mortgages and flood insurance, and funding of health insurance could bring competition and lower premiums in places where one insurer has a monopoly. He said he opposes giving states block grants to cover health care.

“Alabama has not fared as well with the ACA because our governors refused to take federal funds,” he said.

Moore: Moore called for the repeal of the Affordable Care Act, saying churches and charitable organizations, rather than government, should be encouraged to help the needy and poor.

“We do not need socialized medicine, which will ultimately lead to loss of quality and affordability of health care, as well as a loss of access to the latest medical technology,” Moore said. “Obamacare should be completely repealed as soon as possible.

“Businesses should receive tax credits for employee health care coverage, and health insurance should be available between the states for competition and quality care,” he said.

Jones: Education needs to focus on equipping students for life in the 21st century, Jones said.

“We must focus on life-long training and education that meets the needs of employees and employers as the economy continues to grow and change,” he said. “Providing a quality education to all children is the key to a long-term thriving economy.”

Moore: The federal government has no authority for involvement in the educational system, Moore said.

“Programs like Common Core should be eliminated and the development of educational programs returned to the people under state authority,” he said.

Jones: Jones said abortion is a “personal decision,” and he does not favor changing current law, which permits late-term abortions only to protect the life and health of the mother.

“I fully support a woman’s freedom to choose what happens to her own body,” he said. “Having said that, the law for decades has been that late-term procedures are generally restricted except in the case of medical necessity. That’s what I support. I don’t see any changes in that.”

Moore: Moore said he opposes abortion and will seek to overturn Roe vs. Wade, the Supreme Court decision that permits abortion.

“Every life is created by God, and therefore every life is sacred and should be protected and welcomed,” he said. “I have proudly stood for pro-life principles throughout my entire career, and as a senator, I will work to protect the unborn and stand for the dignity of the most vulnerable in our society.”

He said federal funding for Planned Parenthood should end.

Jones: Jones said he favors simplification of the tax code, and he generally believes in cutting business taxes to stimulate economic growth.

“I am troubled by tax breaks for the wealthy, which seem to be in this bill overloaded,” he told CNN.

On the Republican tax bill, he said, “I’m troubled by what appears to be ultimately tax increases or no tax cuts to the middle class. I generally try to support cutting corporate taxes to try to get reinvestment back into this country.”

Moore: Moore said he favors lower taxes, smaller government and less spending as a means of spurring economic growth, and he called for elimination of the income tax.

“I believe in the reduction of taxes at all levels, and a need to reform the tax system by studying and implementing a ‘flat tax’ or a ‘fair tax,’ which is a tax on goods and services purchased instead of a tax on income.”

Jones: Jones said he supports the Deferred Action for Childhood Arrivals program or other means of allowing those who came to the United States as children and have spent their lives here to remain in this country.

“DACA participants must maintain clean records and pass background checks and are not threats – simply the product of their parents and grandparents seeking to give them a better life,” he told al.com earlier this year.

He said he does not favor construction of a wall along the border with Mexico.

“The money can be better used on education or health care,” Jones told Alabama Political Reporter. “I do want to see more border security. I don’t like to see local police being used as immigration officers.”

“We must stop the flow of illegal aliens across both our northern and southern borders,” he said. “Open borders are a threat to our national security and our economy.

“We must allow willing states (like Arizona) to protect the health, safety and welfare of their citizens and use our own military to protect our border,” Moore said. “If a wall is our only option, then we should build it immediately.”

Jones: Jones said continued funding of programs providing health care for the elderly and poor is important for Alabama.

“If you want to do something good for all the citizens of Alabama and not for our just personal agenda, then, by God, you need to make sure we get Medicaid, Medicare and CHIP (Children’s Health Insurance Program) dollars coming into the state to make sure we have a healthy Alabama,” Jones told WAFF-TV in Huntsville.

Five hospitals in rural areas of Alabama have closed since 2010 for reasons including inadequate reimbursements, low volume and high operating costs, Jones said. The state requires high funding of Medicaid to ensure the survival of other rural hospitals, he said.

Moore: Moore has had little to say about his stance on Medicaid and Medicare. Several news organizations have asked the Moore campaign for comment on the two programs but have received no specific replies, and the Jones campaign has suggested Moore would like to abolish the programs.

Jones: It was a mistake for President Donald Trump to withdraw the United States from the Paris Climate Accords, Jones said.

“We are contributing to climate change that is resulting in greater variances in weather, rising sea levels,” he said, citing the drought of 2016 and its effects on agriculture and tourism in Alabama.

Jones also called for development and use of renewable energy sources and other technologies to mitigate the economic impact of climate change.

“Clean air and clean water are not controversial,” he said. “They are essential to our health, our prosperity, and our quality of life.”

There should be a “safety net of health care and job retraining” for workers in coal and other industries where the number of jobs has declined, he said.

Moore: Moore has been mostly silent on environmental issues. His campaign did not respond to a request for comment on his position on the topic.

His web site earlier this year said, “To gain independence from foreign oil, we need to foster development of our natural resources involving nuclear, solar, wind and fossil fuels. Coal mining and oil drilling should be encouraged, subject only to reasonable regulations.”

Jones: The nation’s growing inmate population needs to be addressed through education, as well as by giving judges and prosecutors flexibility in sentencing and use of alternative sentencing plans, Jones said.

“State and local government spending on jails and prisons has risen at more than three times the spending on education in the last two and a half decades,” he said. “We can do better.”

Moore: While Moore has had little to say during the campaign about law enforcement, he was endorsed last month by a group of 13 Alabama sheriffs.

Clarke County Sheriff Ray Norris said Moore has promised to help bring federal funding to the local level to fight crime and deal with the problem of opioid drugs.

“He will funnel money our way to help our sheriffs protect our citizens,” Norris said. 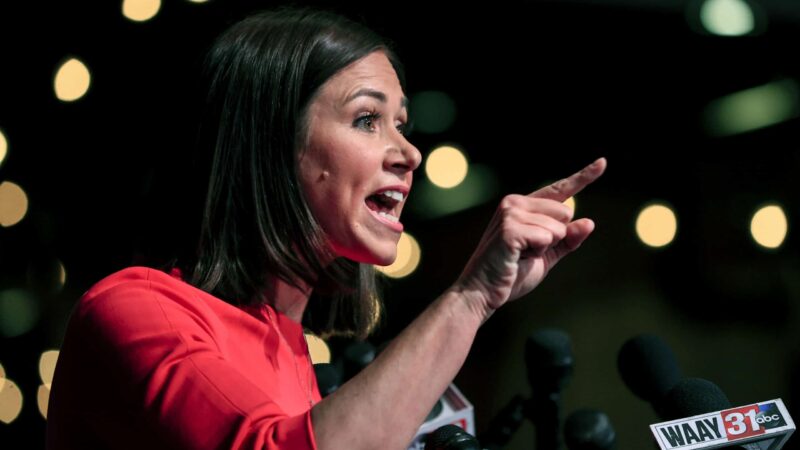 Trump called Britt "an incredible fighter for the people of Alabama." The former president had originally backed U.S. Rep. Mo Brooks in the race, but rescinded that endorsement in March after their relationship soured.