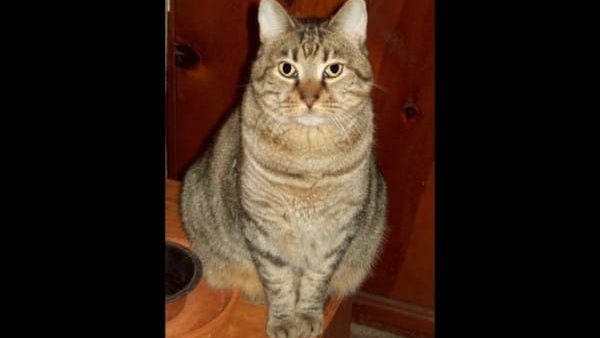 Tiger, a cat belonging to Leah and William Alford, survived the tornado that hit Tuscaloosa on April 27, 2011. But the cat disappeared and has not been seen since.

Thousands of Alabamians have spent the last five years rebuilding their lives after tornados tore through the state on April 27, 2011. The residents of Tuscaloosa’s Forest Lake neighborhood are among them.

The area has few trees now and still bears the hallmarks of the slow recovery with rebuilt homes right across from overgrown, grassy lots. On one corner is a home that belongs to William Alford.

William and his wife Leah are cat people. He says all the animals they’ve owned except for one have been rescues.

William says Tiger was a feral cat in the neighborhood. They captured and adopted him.

“He was a great cat,” says William. “He was her most special friend. He loved Leah.”

Tiger got its name because of its stripes.

When the Tornado Hit

Five years ago, Leah’s mother lived here with Tiger and a few other cats. William and Leah were with her mom that afternoon. As the tornado barreled toward Tuscaloosa, the three of them headed into the bathroom in the center of the house.

“[I] grabbed a couple of the animals, got us all in there,” says William. “But in all the confusion, before I could get the door shut, they fled out into the house.”

Once the storm passed, they got Leah’s mom to the hospital. William looked for the animals in the rubble. He found them safe, but couldn’t find Tiger. Then he looked under the bed.

“[Tiger] had hidden under the bed and survived the storm. He wouldn’t come to me,” says William. “I reached under trying to get him out and I actually touched him. So I picked up the mattress to try and get to him and he fled and disappeared under the rubble never to be seen again.”

“We put out clothes that may have our odor on it that he might come to,” says William. “Put his bedding out that he might find. Put food out every day that was his food hoping he would come back.”

After a while, the larger recovery took over. Leah’s mom survived the tornado impact, but it led to pneumonia. She died five months later. William worked on rebuilding.

All that time getting the house back in shape gave him a chance to watch the cats roaming the neighborhood streets. He even saw some popping in and out of the sewers, like a feline subway. He says he and the neighbors captured and rehomed about a dozen. The cats were easy to trap because there was little food.

“There are no birds because there were no trees,” says William. “Actually five years later, just two weeks ago, I saw the first squirrel.”

Nowadays he leaves food and water for just one cat in bowls behind the house, a one-eyed cat they’ve named Jack. He says that animal disappeared for more than six months before showing up again. Tiger hasn’t come back.

It’s a reminder the pain from the tornados isn’t just about lost people, but the loss of the animals we share our lives with.