Meet the Host of 1A: Joshua Johnson 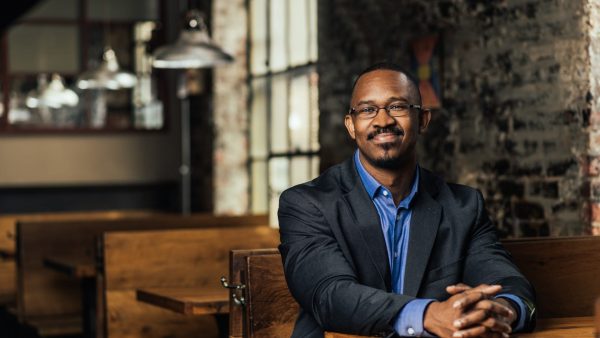 Joshua Johnson, host of 1A

Starting Monday, January 2nd, a new program will succeed The Diane Rehm Show on WBHM.  1A takes a deep and unflinching look at America, bringing context and insight to stories unfolding across the country. The program is hosted by Joshua Johnson. WBHM’s Michael Krall spoke with Johnson.

Michael Krall: Why do you want to host a talk show?

Joshua Johnson: I’ve wanted to create and host a show literally since I was a very little kid. I think now that I’m older, I see the potential of a program like this to help bring people together, to help solve problems, to help make the world make more sense, to bring more light where there is only heat. I think it has the potential to do a lot of good. And honestly, I think it’s fun.

Michael Krall: You’ve said that you want 1A to be a safe space to be heard. What does that mean?

Joshua Johnson: Well, it means that we need to be a response to the current climate in our culture in terms of the way that people engage with one another. You have a lot of people who are very comfortable in their silos and when they come out of their silos they tend to engage with balled fists and sharp elbows. 1A needs to be a space that engages with open arms, where people don’t have to fight their way through conversations, where you don’t have to engage feeling like you need to win or to be right all the time or have all the answers. It needs to be a space where people feel free being who they are and saying what they feel but where we lay down a basic foundation of respect and of civility and of welcome to everybody.

Michael Krall: To that point, why do you think having a respectful conversation is so difficult these days?

Joshua Johnson: I think having a respectful conversation is really, really easy. I think it’s easy if you go into it with the right mentality. Setting that mentality — that’s what’s difficult. But the conversation itself is easy. We know how to have respectful conversations. We have them all the time. I think the challenge is that there aren’t enough spaces that start from a foundational place that says in here, we are all welcome. We are all equal. We don’t have to agree but we will have respect for one another in this space. If you don’t want to do that, that’s cool. But this isn’t the space for you.

Michael Krall: Have you thought about how you can have a discussion with someone when there seems to be these days disagreement just over the basic facts themselves?

Joshua Johnson: Yeah, I have. For me, I am not wishy-washy on what the facts are. We’re not in a post-truth, post-facts era. There are still bits of factual information and I think part of what we have to do in 1A is continually define what we’re talking about. To be clear about what is a fact, what is truth, what makes an argument valid versus sound. Like, what are all of these things? How do we know what we think we know? Where do we get this information from? If we have to keep re-explaining that and re-educating the public at different times on that, that’s fine. I don’t mind doing that. We just need to be clear with what the facts are, establish them, and then keep moving.

Michael Krall: Diane Rehm has been hosting her show for 37 years, and I’m wondering, did she give you any advice?

Joshua Johnson: No, actually, she hasn’t given me any advice. I think what she has given me is a lot of support. Diane has been 1,000 percent supportive to me publicly and privately. She has made it clear on more than one occasion that she is stepping away from the mic of her own volition, and that there are other things that she’s looking forward to doing. She has been, not even gracious, she’s been warm. She’s been really helpful in the transition, and she’s made it really, really easy. But in terms of a hand off or advice, we already agree about a lot of the same things. Like I learned how to do talk partly through growing up listening to her. So a lot of what she did and does is imbued in me. We share a devotion to civil conversation. We share a curiosity about the world.

Michael Krall: Why won’t it be called the Joshua Johnson Show?

Joshua Johnson: Nobody wants a show about me. That’s not a compelling show. I wouldn’t want to listen to the Joshua Johnson Show quite frankly. I just don’t think that’s a reason for people to tune in. 1A has a meaning and it has a purpose. It’s a name that we want to convey two main things in particular. One, I used to work for the public radio station in Miami, WLRN, which worked in partnership with The Miami Herald. And The Miami Herald calls its front page, page 1A. And I like that idea of us focusing on those 1A stories, those front page stories, the ones that are above the fold of the paper which tend to be the big stories that everybody needs to know about, that we really need to make sense of and wrap our heads around. The other meaning behind 1A is the First Amendment. This set of five freedoms that are protected at the top of the Bill of Rights which we believe will become ever more important in 2017 and beyond.

Michael Krall: Anything else you’d like to add Joshua?

Joshua Johnson: There’s a lot of concern that public radio just preaches to the choir. Part of my mission is to turn some of these choir members into evangelists and get them out and tell their friends, their family members, their coworkers, other people who need to hear what we have. That’s how we build this conversation. And I’m looking forward to seeing not what we will do in Washington but what we will do as a nation together when we have this new conversation.