How Law Enforcement Is Fighting The Heroin Problem 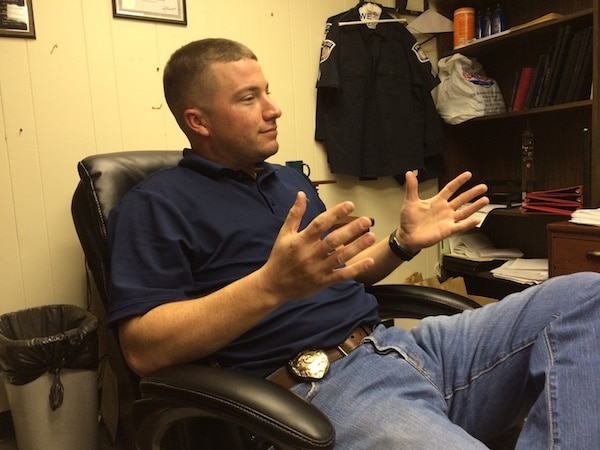 Michael Shupe is a detective sergeant for the Hueytown Police Department. He along with fellow officers, some undercover, battle the heroin epidemic in western Birmingham everyday.

As heroin use increases in North Central Alabama, law enforcement is taking a hard look at how to stop the supply, and handle heroin dealers and users. But beyond arresting dealers, they’re also often the first on the scene of heroin overdoses. Les Lovoy reports on how law enforcement officials are juggling drug enforcement and saving lives.

Hueytown’s Police Department is like in Alabama and across the country. They’re battling what they call a heroin epidemic. Heroin in Alabama comes up from Mexico, and it’s become cheaper and more readily available in recent years. Hueytown Police Chief Chuck Hagler says heroin use hit his side of Birmingham first. As more and more people start using, the department had to be inventive with how it treats users.

“We’ve started to evaluate it on a case–by-case basis,” Hagler notes. “We’ll kind of give the, OK, you OD, somebody called, we give you a free pass on that one. But on the second or third OD, then I almost feel like, I’m not providing some kind of deterrent. I’m almost contributing to his continuing issues.”

Hagler says he’s seen an overflow of heroin and overdoses in his area.

“We actually have people who come from other jurisdictions here because we have really good response time for our paramedics and, they know they weren’t going to get in any trouble,” he explaines. “So, they would literally come here to shoot up in case they OD’d.”

Like other law enforcement departments in Alabama, Chief Hagler looks to the Drug Enforcement Administration, or DEA to help them keep heroin off the streets by arrest and prosecuting dealers. Clay Morris is DEA assistant special agent for Alabama.

“We will target lower level distributors,” he explaines. “But, our ultimate goal is to get to the source of supply. When you look at heroin trafficking, you’re going to have distribution cells in Birmingham that supplies retail street level dealers. Then when you find the head of distribution sale you try to attack that level of the organization, where you can find a regional source of supply.”

But it’s not just catching the bad guys. Chuck Wexler is the executive director of the Police Executive Research Forum, a Washington DC-base think tank. He says now officers have a new job: first responder.

“That’s new for law enforcement,” he says. “Because what that’s really saying is you have a situation that the police officer is coming up on and someone is literally turning blue before your eyes.”

And that’s made police departments across the country start carrying the drug Narcan. When someone overdoses on heroin, it’s because their respiratory system shuts down. Narcan reduces the effects of a heroin overdose.

Police chief Hagler also sees the benefit of officers carrying Narcan. He’s seen it work first hand. But Narcan isn’t without complications. Once a user is revived by narcan, they can be highly agitated. Hagler explains if an officer is alone and tries to revive someone with Narcan, things can go very badly quickly. “They get on the scene and bring this guy back to life, and end up having to use force, maybe even deadly force, trying to control him,” he says. “People aren’t going to understand that.”

Morris of the DEA says fighting the heroin epidemic in Alabama is a daily battle. He notes there are teams of special agents hunting sellers, distributers and suppliers every day. But, despite setbacks, he says he knows every victory saves lives.

He says it was particularly rewarding when his agency was able to assist in the prosecution of a drug dealer for the death of several local young men. “When you put the pieces of that puzzle together and when you bring the case to conclusion, where you are able to hold a drug trafficker accountable, for the death they have caused, one it’s touching, two, you hope it brings some closure to that family in some small way that you can help them with the grief and trauma that they experienced by loosing a child,” Morris explains.

While Alabama’s law enforcement officials fight the influx of heroin, Birmingham Police Captain and State Representative Alan Treadaway has introduced House Bill 208, legislation that, if passed, would make it easier to get Narcan.

Other efforts to decrease the number of overdose deaths nationally include good Samaritan laws. At least 21 states and the District of Columbia have amended their laws, to offer protection from arrest and prosecution for people contacting police or hospitals to report a drug overdose. HB 208 also offers limited immunity from prosecution for persons who seek medical assistance for another person.